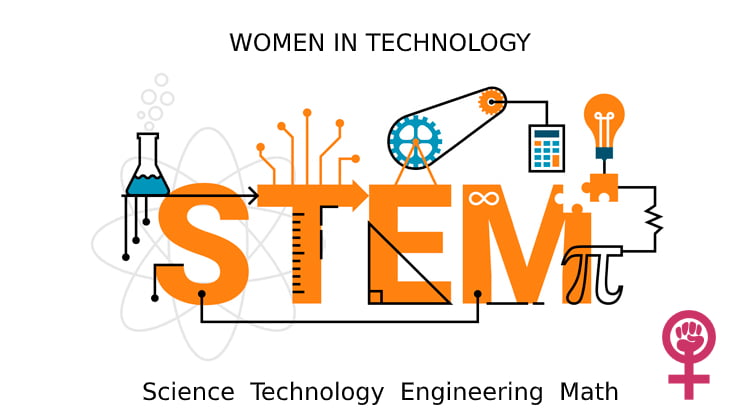 Science and technology are major economic drivers. Money invested in research and development grows to multiply and gets injected back into the economy. Many jobs are available in Science, Technology, Engineering, and Mathematics (STEM) industries, and even more will come. Even if most of these are well-paid jobs, employers are having a hard time filling their open roles. One big issue is the skills gap. In the U.K. only, almost one in 10 STEM businesses have had major problems finding people with the required skills. More than half of these companies expect the shortage to grow even more in the next decade as expansion in this sector continues. The situation is similar in the U.S. where an estimated 3.5 million STEM jobs are needed by 2025. The shortage is caused, among other issues, by a decreasing interest of young people, particularly girls and young women, in pursuing careers in STEM.

A study by the Pew Research Center in U.S. indicated that, although progress has been made in the last two decades, women are still a minority when it comes to choosing to pursue a career in STEM. While women are over-represented in sectors like healthcare, the numbers drop significantly for areas like computer occupations and engineering with percentages of women working as programmers, software developers, system analysts, etc.

After serving in various roles at Princeton University (including as Dean of Engineering and Professor of Computer Science), Maria Klawe went on to become President of Harvey Mudd College. She was the first woman to hold this position since its founding in 1955. The Harvey Mudd College is a top liberal arts college of engineering, science, and mathematics in the U.S.

Even though they found the area interesting enough to study it, and even though startups and tech companies are competing for skilled and talented computer science grads (C.S.), many women choose not to pursue a career in computer science. Attempting to explain why that is, Maria Klawe pointed to three major reasons:

To counteract these beliefs, Klawe and team at the Harvey Mudd College initiated a series of actions that included:

These quickly led to the college quadrupling the percentages of women majoring in C.S. from 10 percent in 2016 to 42 percent in 2010 – the numbers have been averaging around 40 percent ever since.

In Europe, the numbers average at about 40 percent of scientists and engineers being women, but that can vary significantly between countries. Countries like Lithuania, Bulgaria, Latvia, and Portugal lead the way with women in science and engineering, accounting for more than 50 percent. In countries like Hungary, Luxembourg, Finland, or Germany, the percentages lag between 25 and 33 percent.

In the United Kingdom, organizations like STEM Women and Engineering U.K. have been working with both public and private counterparts to bridge the gender gap. In 2018, the number of women working in engineering was still very low at 12 percent despite the fact that women accounted for 47 percent of the overall U.K. workforce. While progress has certainly been made, perceptions of gender roles along with an incorrect perception of job content are still at the core of why girls and women have more difficulty considering engineering as an appropriate career option. The 2019 Engineering Brand Monitor reported that “clear gender differences were also found across the board, with girls being less likely than boys to consider a career in the [engineering] industry or know what to do next in order to become an engineer. They are also less likely to believe they could become an engineer if they wanted to.”

How come Siri, Cortana, or Alexa are all women, and does diversity matter?

If stereotypical portrayals of men as engineers or scientists have discouraged girls and women from considering such roles as career options, what can we make of current A.I. trends that seem to go against two decades of efforts to step away from such stereotyping? Why is it that Apple’s Siri, Google’s Holly, Microsoft’s Cortana, and Amazon’s Alexa are all women? Is this an unfortunate comeback of the much-despised women as secretaries and personal assistants stereotype? As Wired magazine was wondering in a 2019 article, where are the women and how come they are not more annoyed by this? Since only 12 percent of those machine learning researches being women, that’s probably why their voices aren’t heard.

For those who don’t find it clear why diversity matters, there are many studies that point out the benefits of having a diverse workforce. The report published by McKinsey & Company in 2015 stated that their extensive research found a direct correlation between the level of diversity of a leadership team and increased financial performance by attracting better talent, being more customer-oriented, having employees that are more satisfied, and being better at making decisions.

Making the distinction between positive action and positive discrimination

As an engineering manager, you might feel overwhelmed and even frustrated by the number of requirements and mandatory training that your company is subjecting management teams to. Unfortunately, the trick with biases and stereotyping is that, despite our best intentions, it’s sometimes difficult to spot them, and developing the ability to locate such blind spots is essential. While legislation can vary from country to country, there are often many steps that a company can take to make sure that they offer equal opportunities and limit gender biases when it comes to both hiring and promoting employees. While it is true that when it comes to areas like software engineering, programming, or system analysis, there are often more male candidates applying for a position that cannot be an excuse for not going the extra mile to create a more diverse candidate pool.

As defined by Thomson Reuters Practical Law, positive action is a “ permitted action by an employer to assist protected groups which are disadvantaged or under-represented in a particular job. It is a limited exception to the prohibition on discrimination in employment.” It would be silly to ask a manager to hire a woman engineer if she isn’t fit for the role, but it would make sense to have a strategy that encourages managers to favor the woman if she could do the job just as well as the male candidates, but would also would tilt the gender balance scale in an all-male team. In most countries, many organizations have been created for the purpose of advocating or helping to enforce equal rights in terms of gender, ethnicity, age, etc. and many of them can be great partners for employers looking to build positive action strategies. Reaching out to them for counseling or training could make a great difference in terms of identifying blind spots and addressing gender imbalance.

What engineering managers can do to help

The 2019 Women in the Workplace study by LeanIn.Org and McKinsey & Company showed that, yet again, the U.S. hasn’t made much progress towards diversity representation in American companies. For the purpose of the study, the term “representation” pointed to whether or not the percentage of female managers matched the percentage of women employed by the company. Simply put, if 40 percent of the employees were women, 40 percent of managers should have been women.

One of the many interesting things the study points to is the temptation to judge women based on what they have done and men by what we think they could do. This especially affects women on the verge of being promoted to their first managerial role and puts them at a disadvantage from the very beginning of their careers. To counteract this bias, the authors or the study list a number of steps that companies can take to fix the problem:

For more useful insights and advice, read the full report. With International Women’s Day just around the corner on March 8, maybe it’s time we stop giving women flowers and start giving them more real opportunities. Whether you are a man or a woman, you need to be a data-driven engineering leader. Waydev provides you with metrics to help you make decisions backed by data, increase visibility, and enhance productivity.