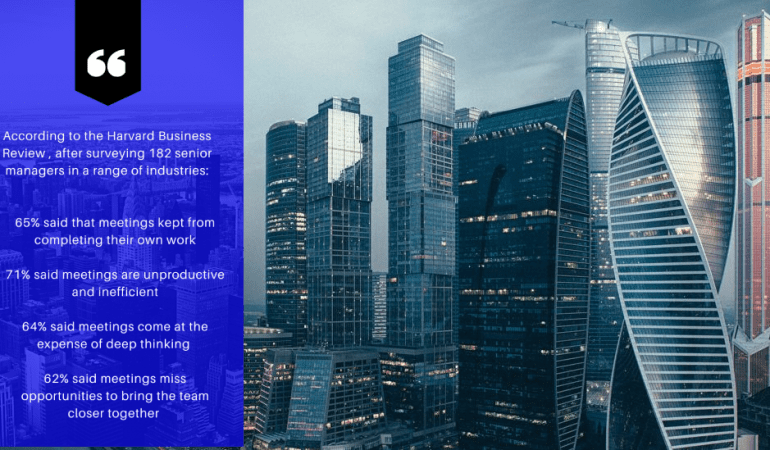 When was the last time you felt like bolting out of the conference room either bored to death or incredible frustrated and feeling like your time was carelessly and disrespectfully wasted? We bet it was as close as yesterday. What, is happening now? Well, get out now!

Kidding aside, most managers agree that, for all their effectiveness with getting people in one room to solve important problems, meetings have been gaining a bad reputation for not really solving much. And it’s not just a feeling, the data seems to be pointing that way too — with research indicating that both duration and frequency of meetings have increased significantly over the last 50 years. So much so that executives now spend, on average, more than 20 hours each week in both physical and virtual conference rooms.

That being said, most engineering managers also agree the problem isn’t necessarily that meetings exist but that, too often they are poorly organized, badly communicated and/or scheduled and poorly prepared for. While you can’t always control the content and timing of meetings you get pulled into, you do have a say in the ones you call for. So, before you hit the calendar button, have a think about whether that meeting is even necessary and if the goal in mind can be achieved some other way (perhaps during regular 1-on-1s with your engineers), then by all means, do that.

If it can’t be avoided, then set a clear goal for the meeting and what you would like to achieve, decide on the format and on the absolute necessary length. Generally, meetings tend to go on for as long or longer than you’ve planned — remember that no one (ever!) complained about a meeting finishing earlier and people appreciate others being mindful of their time (it is, after all, a zero-sum resource). Once you are clear on who needs to attend (ask yourself if those invited really need to be there or if it would be a better use of their time to be allowed to focus on other tasks) and avoid scheduling the meeting during peak productivity hours. Engineers work best in 2-3 hour time slots that allow them to deeply focus on their work so, avoid breaking their daily calendar up too much. Think about whether the meeting should happen in the office or off-site. People usually appreciate a change in scenery (and the occasional escape from the bland cafeteria food) unless it creates additional problems like time wasted on commuting during high traffic or having to rush back to the office for other meetings.

Communicate the agenda and purpose of the meeting when scheduling it and, if you need people to prepare status reports or brainstorm around specific topics, make that clear. There’s nothing worse than showing up for a meeting and feeling like there was homework and no one told you about it. You will also need to decide who will be leading the meeting – will it be you, an engineer on your team, an external coach or facilitator?

With preparation done and everyone in the room ready to roll, show respect for those present by starting on time. Open the session with a quick overview of the larger organizational context, go through recent changes or updates, restate the purpose of the meeting and the expectations and set the ground rules. When possible, share some good news (like a new client onboarded or a nice piece of feedback from someone in the higher ranks). Follow through on the set agenda, keep time, and try to involve everyone attending. If discussions become too heated on a topic or issue, make it the subject of a separate discussion at a later date and move forward with the set agenda.

Even if it seems a bit old-school, it would be useful to have someone take notes to keep track of commitments and responsibilities taken on, timelines and other next steps – this will strengthen communications and ensure follow-through. Don’t forget to agree on how commitments will be tracked and progress communicated. Be prepared to ask for feedback after the meeting and for suggestions on how to make future meetings even more productive (and as pain-free as possible).

END_OF_DOCUMENT_TOKEN_TO_BE_REPLACED

Should you hire more software engineers or better manage the ones you have?